A change at the helm of the Navy League

A change at the helm of the Navy League 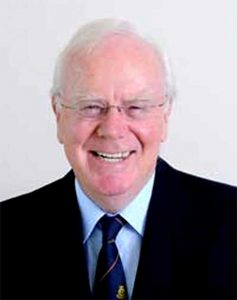 At the Navy League of Australia’s Annual General Meeting held in Canberra on 13 October 2017 long-serving President, CMDR Graham Harris RFD** RANR (Rtd) retired after 23 years at the helm of the League.

Graham Harris graduated in law from the University of Melbourne and practised as a barrister from 1961 to 1994, with a break from 1980 to 1983 when he entered Federal Parliament as the member for the Victorian seat of Chisholm in the House of Representatives. During his time in Parliament he served on three Government Committees — Defence, Law and Government and Health and Welfare — becoming Chairman of the latter in 1982. He had become involved with the Liberal Party of Australia in 1960 and continued to be active in the party until 2009. In 2006 the Federal Executive of the Party awarded him the Liberal Party Distinguished Service Award.

After his time in Parliament, Graham returned to active legal practice until June 1994, when he became more deeply involved with business interests.

From his earliest days Graham Harris had a deep interest in the Navy. In 1964 he was invited to join the RANR Intelligence Division (NID) of which he was an active member from April 1965 to July 1993. In 1972 he spent some time in Canberra working with the Joint Intelligence Organisations (now the Defence Intelligence Organisation) and was promoted to Lieutenant Commander RANR in June 1974. In the mid-1970s he became involved in the training of intelligence officers throughout Australia.

LCDR Harris was awarded the Reserve Force Decoration in 1985, was promoted to Commander in June 1985 and became Senior Officer NID Victoria in January 1986. A new position of Senior Officer NID was created in 1989 (later titled Director Naval Intelligence (Reserves)) and Graham was appointed to this position as the senior naval officer for NID in Australia. He left the position of DNI(R) in July 1993 and moved to the retired list in August 1997.

Graham joined the Navy League of Australia in 1973, at a time when it had relinquished the task of running the Naval Cadets (a role taken over by the Department of Defence) and was developing a role as an advocate for the Navy in Australia. He joined the Executive of the Victorian Division, becoming President of the Division in 1992 when he became deeply involved in securing the future of Osborne House at Geelong, the first home of the RAN Naval College.

Election as Federal President of the Navy League of Australia followed in 1994. The following 23 years were to be a very busy time for Graham with the corporate restructure of the League and its Branches, the sorting out of the League’s properties, the revival of the Queensland Division and the preparation of many reports and submissions to Government, Parliamentary Committees, the Department of Defence and the Royal Australian Navy. During this period Keeping Watch: A History of the Navy League of Australia 1895–2015 was written by Malcolm Longstaff and published by the League.
Graham Harris decided to retire as Federal President in 2017 and hand over the helm to a younger generation. His leadership of the League for 23 active years was outstanding and all members who worked with him during those years will always remember the experience with warmth and respect.

In 2001 Matthew was the relief Commanding Officer of the National Sail Training Ship Young Endeavour, and has been awarded the Australian Service Medal for service enforcing United Nations sanctions on Iraq and a Certificate of Achievement in the 1999 Young Australian of the Year Awards.

Matthew Rowe is currently Chief Executive Officer of the Queensland Maritime Museum having previously served two three-year terms as an invited director of the Museum.